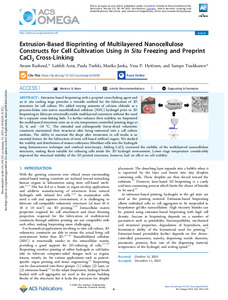 Extrusion-based bioprinting with a preprint cross-linking agent and an in situ cooling stage provides a versatile method for the fabrication of 3D structures for cell culture. We added varying amounts of calcium chloride as a precross-linker into native nanofibrillated cellulose (NFC) hydrogel prior to 3D bioprinting to fabricate structurally stable multilayered constructs without the need for a separate cross-linking bath. To further enhance their stability, we bioprinted the multilayered structures onto an in situ temperature-controlled printing stage at 25, 0, and −10 °C. The extruded and subsequently freeze-dried volumetric constructs maintained their structures after being immersed into a cell culture medium. The ability to maintain the shape after immersion in cell media is an essential feature for the fabrication of stem cell-based artificial organs. We studied the viability and distribution of mouse embryonic fibroblast cells into the hydrogels using luminescence technique and confocal microscopy. Adding CaCl2 increased the stability of the multilayered nanocellulose structures, making them suitable for culturing cells inside the 3D hydrogel environment. Lower stage temperature considerably improved the structural stability of the 3D printed structures, however, had no effect on cell viability.