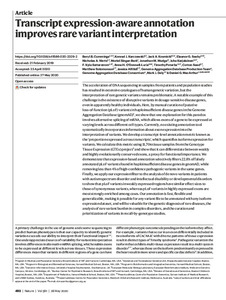 The acceleration of DNA sequencing in samples from patients and population studies has resulted in extensive catalogues of human genetic variation, but the interpretation of rare genetic variants remains problematic. A notable example of this challenge is the existence of disruptive variants in dosage-sensitive disease genes, even in apparently healthy individuals. Here, by manual curation of putative loss-of-function (pLoF) variants in haploinsufficient disease genes in the Genome Aggregation Database (gnomAD)1, we show that one explanation for this paradox involves alternative splicing of mRNA, which allows exons of a gene to be expressed at varying levels across different cell types. Currently, no existing annotation tool systematically incorporates information about exon expression into the interpretation of variants. We develop a transcript-level annotation metric known as the ‘proportion expressed across transcripts’, which quantifies isoform expression for variants. We calculate this metric using 11,706 tissue samples from the Genotype Tissue Expression (GTEx) project2 and show that it can differentiate between weakly and highly evolutionarily conserved exons, a proxy for functional importance. We demonstrate that expression-based annotation selectively filters 22.8% of falsely annotated pLoF variants found in haploinsufficient disease genes in gnomAD, while removing less than 4% of high-confidence pathogenic variants in the same genes. Finally, we apply our expression filter to the analysis of de novo variants in patients with autism spectrum disorder and intellectual disability or developmental disorders to show that pLoF variants in weakly expressed regions have similar effect sizes to those of synonymous variants, whereas pLoF variants in highly expressed exons are most strongly enriched among cases. Our annotation is fast, flexible and generalizable, making it possible for any variant file to be annotated with any isoform expression dataset, and will be valuable for the genetic diagnosis of rare diseases, the analysis of rare variant burden in complex disorders, and the curation and prioritization of variants in recall-by-genotype studies.