Mapping geographical inequalities in childhood diarrhoeal morbidity and mortality in low-income and middle-income countries, 2000-17 : Analysis for the Global Burden of Disease Study 2017 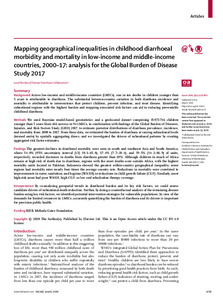 Background Across low-income and middle-income countries (LMICs), one in ten deaths in children younger than 5 years is attributable to diarrhoea. The substantial between-country variation in both diarrhoea incidence and mortality is attributable to interventions that protect children, prevent infection, and treat disease. Identifying subnational regions with the highest burden and mapping associated risk factors can aid in reducing preventable childhood diarrhoea. Methods We used Bayesian model-based geostatistics and a geolocated dataset comprising 15 072 746 children younger than 5 years from 466 surveys in 94 LMICs, in combination with findings of the Global Burden of Diseases, Injuries, and Risk Factors Study (GBD) 2017, to estimate posterior distributions of diarrhoea prevalence, incidence, and mortality from 2000 to 2017. From these data, we estimated the burden of diarrhoea at varying subnational levels (termed units) by spatially aggregating draws, and we investigated the drivers of subnational patterns by creating aggregated risk factor estimates. Findings The greatest declines in diarrhoeal mortality were seen in south and southeast Asia and South America, where 54·0% (95% uncertainty interval [UI] 38·1-65·8), 17·4% (7·7-28·4), and 59·5% (34·2-86·9) of units, respectively, recorded decreases in deaths from diarrhoea greater than 10%. Although children in much of Africa remain at high risk of death due to diarrhoea, regions with the most deaths were outside Africa, with the highest mortality units located in Pakistan. Indonesia showed the greatest within-country geographical inequality; some regions had mortality rates nearly four times the average country rate. Reductions in mortality were correlated to improvements in water, sanitation, and hygiene (WASH) or reductions in child growth failure (CGF). Similarly, most high-risk areas had poor WASH, high CGF, or low oral rehydration therapy coverage. Interpretation By co-analysing geospatial trends in diarrhoeal burden and its key risk factors, we could assess candidate drivers of subnational death reduction. Further, by doing a counterfactual analysis of the remaining disease burden using key risk factors, we identified potential intervention strategies for vulnerable populations. In view of the demands for limited resources in LMICs, accurately quantifying the burden of diarrhoea and its drivers is important for precision public health.