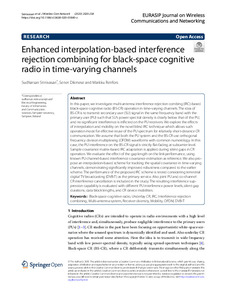 In this paper, we investigate multi-antenna interference rejection combing (IRC)-based black-space cognitive radio (BS-CR) operation in time-varying channels. The idea of BS-CR is to transmit secondary user (SU) signal in the same frequency band with the primary user (PU) such that SU’s power spectral density is clearly below that of the PU, and no significant interference is inflicted on the PU receivers. We explore the effects of interpolation and mobility on the novel blind IRC technique which allows such operation mode for effective reuse of the PU spectrum for relatively short-distance CR communication. We assume that both the PU system and the BS-CR use orthogonal frequency division multiplexing (OFDM) waveforms with common numerology. In this case, the PU interference on the BS-CR signal is strictly flat-fading at subcarrier level. Sample covariance matrix-based IRC adaptation is applied during silent gaps in CR operation. We evaluate the effect of the gap length on the link performance, using known PU channel-based interference covariance estimation as reference. We also propose an interpolation-based scheme for tracking the spatial covariance in time-varying channels, demonstrating significantly improved robustness compared to the earlier scheme. The performance of the proposed IRC scheme is tested considering terrestrial digital TV broadcasting (DVB-T) as the primary service. Also joint PU and co-channel CR interference cancellation is included in the study. The resulting interference suppression capability is evaluated with different PU interference power levels, silent gap durations, data block lengths, and CR device mobilities.