Autopsy examination in sudden cardiac death : a current perspective on behalf of the Association for European Cardiovascular Pathology 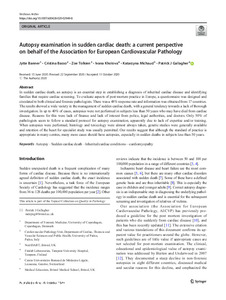 In sudden cardiac death, an autopsy is an essential step in establishing a diagnosis of inherited cardiac disease and identifying families that require cardiac screening. To evaluate aspects of post-mortem practice in Europe, a questionnaire was designed and circulated to both clinical and forensic pathologists. There was a 48% response rate and information was obtained from 17 countries. The results showed a wide variety in the management of sudden cardiac death, with a general tendency towards a lack of thorough investigation. In up to 40% of cases, autopsies were not performed in subjects less than 50 years who may have died from cardiac disease. Reasons for this were lack of finance and lack of interest from police, legal authorities, and doctors. Only 50% of pathologists seem to follow a standard protocol for autopsy examination, apparently due to lack of expertise and/or training. When autopsies were performed, histology and toxicology were almost always taken, genetic studies were generally available and retention of the heart for specialist study was usually permitted. Our results suggest that although the standard of practice is appropriate in many centres, many more cases should have autopsies, especially in sudden deaths in subjects less than 50 years.