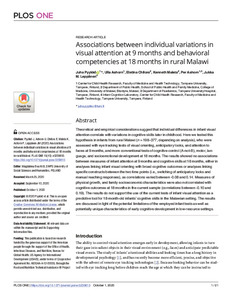 Theoretical and empirical considerations suggest that individual differences in infant visual attention correlate with variations in cognitive skills later in childhood. Here we tested this hypothesis in infants from rural Malawi (n = 198–377, depending on analysis), who were assessed with eye tracking tests of visual orienting, anticipatory looks, and attention to faces at 9 months, and more conventional tests of cognitive control (A-not-B), motor, language, and socioemotional development at 18 months. The results showed no associations between measures of infant attention at 9 months and cognitive skills at 18 months, either in analyses linking infant visual orienting with broad cognitive outcomes or analyses linking specific constructs between the two time points (i.e., switching of anticipatory looks and manual reaching responses), as correlations varied between -0.08 and 0.14. Measures of physical growth, and family socioeconomic characteristics were also not correlated with cognitive outcomes at 18 months in the current sample (correlations between -0.10 and 0.19). The results do not support the use of the current tests of infant visual attention as a predictive tool for 18-month-old infants’ cognitive skills in the Malawian setting. The results are discussed in light of the potential limitations of the employed infant tests as well as potentially unique characteristics of early cognitive development in low-resource settings.