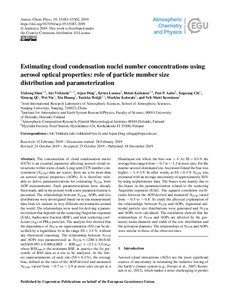 The concentration of cloud condensation nuclei (CCN) is an essential parameter affecting aerosol–cloud interactions within warm clouds. Long-term CCN number concentration (NCCN) data are scarce; there are a lot more data on aerosol optical properties (AOPs). It is therefore valuable to derive parameterizations for estimating NCCN from AOP measurements. Such parameterizations have already been made, and in the present work a new parameterization is presented. The relationships between NCCN, AOPs, and size distributions were investigated based on in situ measurement data from six stations in very different environments around the world. The relationships were used for deriving a parameterization that depends on the scattering Ångström exponent (SAE), backscatter fraction (BSF), and total scattering coefficient (σsp) of PM10 particles. The analysis first showed that the dependence of NCCN on supersaturation (SS) can be described by a logarithmic fit in the range SS <1.1 %, without any theoretical reasoning. The relationship between NCCN and AOPs was parameterized as NCCN≈((286±46)SAE ln(SS/(0.093±0.006))(BSF − BSFmin) + (5.2±3.3))σsp, where BSFmin is the minimum BSF, in practice the 1st percentile of BSF data at a site to be analyzed. At the lowest supersaturations of each site (SS ≈0.1 %), the average bias, defined as the ratio of the AOP-derived and measured NCCN, varied from ∼0.7 to ∼1.9 at most sites except at a Himalayan site where the bias was >4. At SS >0.4 % the average bias ranged from ∼0.7 to ∼1.3 at most sites. For the marine-aerosol-dominated site Ascension Island the bias was higher, ∼1.4–1.9. In other words, at SS >0.4 % NCCN was estimated with an average uncertainty of approximately 30 % by using nephelometer data. The biases were mainly due to the biases in the parameterization related to the scattering Ångström exponent (SAE). The squared correlation coefficients between the AOP-derived and measured NCCN varied from ∼0.5 to ∼0.8. To study the physical explanation of the relationships between NCCN and AOPs, lognormal unimodal particle size distributions were generated and NCCN and AOPs were calculated. The simulation showed that the relationships of NCCN and AOPs are affected by the geometric mean diameter and width of the size distribution and the activation diameter. The relationships of NCCN and AOPs were similar to those of the observed ones.