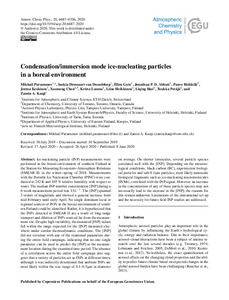 Ice-nucleating particle (INP) measurements were performed in the boreal environment of southern Finland at the Station for Measuring Ecosystem-Atmosphere Relations (SMEAR II) in the winter-spring of 2018. Measurements with the Portable Ice Nucleation Chamber (PINC) were conducted at 242 K and 105 % relative humidity with respect to water. The median INP number concentration [INP] during a 6-week measurement period was 13 L-1. The [INP] spanned 3 orders of magnitude and showed a general increase from mid-February until early April. No single dominant local or regional sources of INPs in the boreal environment of southern Finland could be identified. Rather, it is hypothesised that the INPs detected at SMEAR II are a result of long-range transport and dilution of INPs sourced far from the measurement site. Despite high variability, the measured [INP] values fall within the range expected for the [INP] measured elsewhere under similar thermodynamic conditions. The [INP] did not correlate with any of the examined parameters during the entire field campaign, indicating that no one single parameter can be used to predict the [INP] at the measurement location during the examined time period. The absence of a correlation across the entire field campaign also suggests that a variety of particles act as INPs at different times, although it was indirectly determined that ambient INPs are most likely within the size range of 0.1-0.5 μm in diameter on average. On shorter timescales, several particle species correlated well with the [INP]. Depending on the meteorological conditions, black carbon (BC), supermicron biological particles and sub-0.1 μm particles, most likely nanoscale biological fragments such as ice-nucleating macromolecules (INMs), correlated with the INP signal. However, an increase in the concentration of any of these particle species may not necessarily lead to the increase in the [INP]; the reasons for this remain unknown. Limitations of the instrumental set-up and the necessity for future field INP studies are addressed. .