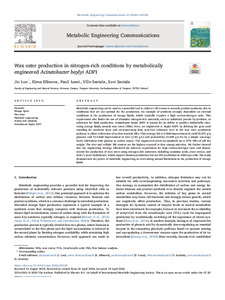 Metabolic engineering can be used as a powerful tool to redirect cell resources towards product synthesis, also in conditions that are not optimal for the production. An example of synthesis strongly dependent on external conditions is the production of storage lipids, which typically requires a high carbon/nitrogen ratio. This requirement also limits the use of abundant nitrogen-rich materials, such as industrial protein by-products, as substrates for lipid production. Acinetobacter baylyi ADP1 is known for its ability to produce industrially interesting storage lipids, namely wax esters (WEs). Here, we engineered A. baylyi ADP1 by deleting the gene aceA encoding for isocitrate lyase and overexpressing fatty acyl-CoA reductase Acr1 in the wax ester production pathway to allow redirection of carbon towards WEs. This strategy led to 3-fold improvement in yield (0.075 ​g/g glucose) and 3.15-fold improvement in titer (1.82 ​g/L) and productivity (0.038 ​g/L/h) by a simple one-stage batch cultivation with glucose as carbon source. The engineered strain accumulated up to 27% WEs of cell dry weight. The titer and cellular WE content are the highest reported to date among microbes. We further showed that the engineering strategy alleviated the inherent requirement for high carbon/nitrogen ratio and demonstrated the production of wax esters using nitrogen-rich substrates including casamino acids, yeast extract, and baker's yeast hydrolysate, which support biomass production but not WE production in wild-type cells. The study demonstrates the power of metabolic engineering in overcoming natural limitations in the production of storage lipids.