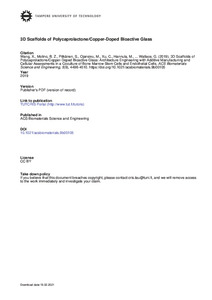 The local delivery of Cu2+ from copper-doped bioactive glass (Cu-BaG) was combined with 3D printing of polycaprolactone (PCL) scaffolds for its potent angiogenic effect in bone tissue engineering. PCL and Cu-BaG were, respectively, dissolved and dispersed in acetone to formulate a moderately homogeneous ink. The PCL/Cu-BaG scaffolds were fabricated via direct ink writing into a cold ethanol bath. The architecture of the printed scaffolds, including strut diameter, strut spacing, and porosity, were investigated and characterized. The PCL/Cu-BaG scaffolds showed a Cu-BaG content-dependent mechanical property, as the compressive Young's modulus ranged from 7 to 13 MPa at an apparent porosity of 60%. The ion dissolution behavior in simulated body fluid was evaluated, and the hydroxyapatite-like precipitation on the strut surface was confirmed. Furthermore, the cytocompatibility of the PCL/Cu-BaG scaffolds was assessed in human bone marrow stem cell (hBMSC) culture, and a dose-dependent cytotoxicity of Cu2+ was observed. Here, the PCL/BaG scaffold induced the higher expression of late osteogenic genes OSTEOCALCIN and DLX5 in comparison to the PCL scaffold. The doping of Cu2+ in BaG elicited higher expression of the early osteogenic marker gene RUNX2a but decreased the expression of late osteogenic marker genes OSTEOCALCIN and DLX5 in comparison to the PCL/BaG scaffold, demonstrating the suppressing effect of Cu2+ on osteogenic differentiation of hBMSCs. In a coculture of hBMSCs and human umbilical vein endothelial cells, both the PCL/BaG and PCL/Cu-BaG scaffolds stimulated the formation of a denser tubule network, compared to the PCL scaffold. Meanwhile, only slightly higher gene expression of vWF was observed with the PCL/Cu-BaG scaffold than with the PCL/BaG scaffold, indicating the potent angiogenic effect of the released Cu2+.