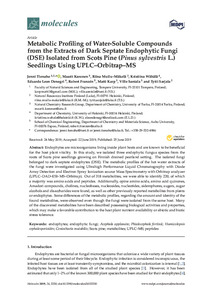 Endophytes are microorganisms living inside plant hosts and are known to be beneficial for the host plant vitality. In this study, we isolated three endophytic fungus species from the roots of Scots pine seedlings growing on Finnish drained peatland setting. The isolated fungi belonged to dark septate endophytes (DSE). The metabolic profiles of the hot water extracts of the fungi were investigated using Ultrahigh Performance Liquid Chromatography with Diode Array Detection and Electron Spray Ionization source Mass Spectrometry with Orbitrap analyzer (UPLC–DAD–ESI–MS–Orbitrap). Out of 318 metabolites, we were able to identify 220, of which a majority was amino acids and peptides. Additionally, opine amino acids, amino acid quinones, Amadori compounds, cholines, nucleobases, nucleosides, nucleotides, siderophores, sugars, sugar alcohols and disaccharides were found, as well as other previously reported metabolites from plants or endophytes. Some differences of the metabolic profiles, regarding the amount and identity of the found metabolites, were observed even though the fungi were isolated from the same host. Many of the discovered metabolites have been described possessing biological activities and properties, which may make a favorable contribution to the host plant nutrient availability or abiotic and biotic stress tolerance.