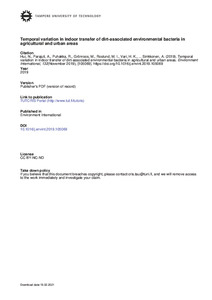 An agricultural environment and exposure to diverse environmental microbiota has been suggested to confer protection against immune-mediated disorders. As an agricultural environment may have a protective role, it is crucial to determine whether the limiting factors in the transfer of environmental microbiota indoors are the same in the agricultural and urban environments. We explored how sampling month, garden diversity and animal ownership affected the indoor-transfer of environmental microbial community. We collected litter from standardized doormats used for 2 weeks in June and August 2015 and February 2016 and identified bacterial phylotypes using 16S rRNA Illumina MiSeq sequencing. In February, the diversity and richness of the whole bacterial community and the relative abundance of environment-associated taxa were reduced, whereas human-associated taxa and genera containing opportunistic pathogens were enriched in the doormats. In summer, the relative abundances of several taxa associated previously with beneficial health effects were higher, particularly in agricultural areas. Surprisingly, the importance of vegetation on doormat microbiota was more observable in February, which may have resulted from snow cover that prevented contact with microbes in soil. Animal ownership increased the prevalence of genera Bacteroides and Acinetobacter in rural doormats. These findings underline the roles of season, living environment and lifestyle in the temporal variations in the environmental microbial community carried indoors. As reduced contact with diverse microbiota is a potential reason for immune system dysfunction, the results may have important implications in the etiology of immune-mediated, non-communicable diseases.