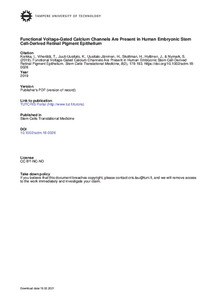 Retinal pigment epithelium (RPE) performs important functions for the maintenance of photoreceptors and vision. Malfunctions within the RPE are implicated in several retinal diseases for which transplantations of stem cell‐derived RPE are promising treatment options. Their success, however, is largely dependent on the functionality of the transplanted cells. This requires correct cellular physiology, which is highly influenced by the various ion channels of RPE, including voltage‐gated Ca2+ (CaV) channels. This study investigated the localization and functionality of CaV channels in human embryonic stem cell (hESC)‐derived RPE. Whole‐cell patch‐clamp recordings from these cells revealed slowly inactivating L‐type currents comparable to freshly isolated mouse RPE. Some hESC‐RPE cells also carried fast transient T‐type resembling currents. These findings were confirmed by immunostainings from both hESC‐ and mouse RPE that showed the presence of the L‐type Ca2+ channels CaV1.2 and CaV1.3 as well as the T‐type Ca2+ channels CaV3.1 and CaV3.2. The localization of the major subtype, CaV1.3, changed during hESC‐RPE maturation co‐localizing with pericentrin to the base of the primary cilium before reaching more homogeneous membrane localization comparable to mouse RPE. Based on functional assessment, the L‐type Ca2+ channels participated in the regulation of vascular endothelial growth factor secretion as well as in the phagocytosis of photoreceptor outer segments in hESC‐RPE. Overall, this study demonstrates that a functional machinery of voltage‐gated Ca2+ channels is present in mature hESC‐RPE, which is promising for the success of transplantation therapies.