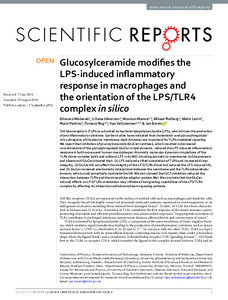 Toll-like receptor 4 (TLR4) is activated by bacterial lipopolysaccharide (LPS), which drives the production of proinflammatory cytokines. Earlier studies have indicated that cholesterol- and glycosphingolipid-rich subregions of the plasma membrane (lipid domains) are important for TLR4-mediated signaling. We report that inhibition of glucosylceramide (GluCer) synthase, which resulted in decreased concentrations of the glycosphingolipid GluCer in lipid domains, reduced the LPS-induced inflammatory response in both mouse and human macrophages. Atomistic molecular dynamics simulations of the TLR4 dimer complex (with and without LPS in its MD-2 binding pockets) in membranes (in the presence and absence of GluCer) showed that: (1) LPS induced a tilted orientation of TLR4 and increased dimer integrity; (2) GluCer did not affect the integrity of the LPS/TLR4 dimer but reduced the LPS-induced tilt; and (3) GluCer increased electrostatic interactions between the membrane and the TLR4 extracellular domain, which could potentially modulate the tilt. We also showed that GCS inhibition reduced the interaction between TLR4 and the intracellular adaptor protein Mal. We conclude that the GluCer-induced effects on LPS/TLR4 orientation may influence the signaling capabilities of the LPS/TLR4 complex by affecting its interaction with downstream signaling proteins.