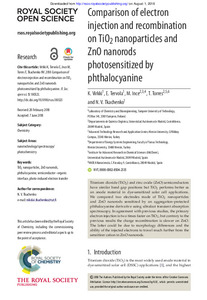 Titanium dioxide (TiO2) and zinc oxide (ZnO) semiconductors have similar band gap positions but TiO2 performs better as an anode material in dye-sensitized solar cell applications. We compared two electrodes made of TiO2 nanoparticles and ZnO nanorods sensitized by an aggregation-protected phthalocyanine derivative using ultrafast transient absorption spectroscopy. In agreement with previous studies, the primary electron injection is two times faster on TiO2, but contrary to the previous results the charge recombination is slower on ZnO. The latter could be due to morphology differences and the ability of the injected electrons to travel much further from the sensitizer cation in ZnO nanorods.