Innovativeness of Staff in Higher Education: Do Implicit Theories and Goal Orientations Matter? 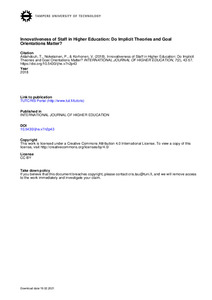 Innovativeness has been believed to be a significant psychological construct underlying individual differences in adopting novel ideas, experiences or approaches. Although few recent studies have contributed to identifying the factors that predict innovativeness, there is a lack of research showing the impacts of implicit theories and goal orientations on innovativeness. This study aimed to investigate this matter. A sample comprising 315 staff members working in three Finnish higher educational institutions completed self-reported questionnaires. The results showed that the mastery goal orientation fully mediated the effect of both the entity theory of ability and personality on innovativeness. However, both entity theories failed to predict the performance-avoidance goal orientation, while the performance-avoidance goal orientation showed to be a significant, negative predictor of innovativeness. This study presents a promising framework for examining innovativeness in the higher educational context where further research is suggested.