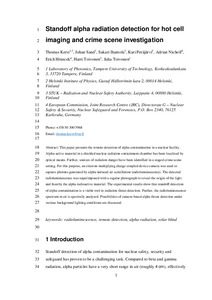 This paper presents the remote detection of alpha contamination in a nuclear facility. Alpha-active material in a shielded nuclear radiation containment chamber has been localized by optical means. Furthermore, sources of radiation danger have been identified in a staged crime scene setting. For this purpose, an electron-multiplying charge-coupled device camera was used to capture photons generated by alpha-induced air scintillation (radioluminescence). The detected radioluminescence was superimposed with a regular photograph to reveal the origin of the light and thereby the alpha radioactive material. The experimental results show that standoff detection of alpha contamination is a viable tool in radiation threat detection. Furthermore, the radioluminescence spectrum in the air is spectrally analyzed. Possibilities of camera-based alpha threat detection under various background lighting conditions are discussed.