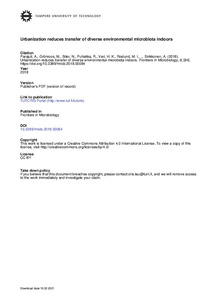 Expanding urbanization is a major factor behind rapidly declining biodiversity. It has been proposed that in urbanized societies, the rarity of contact with diverse environmental microbiota negatively impacts immune function and ultimately increases the risk for allergies and other immune-mediated disorders. Surprisingly, the basic assumption that urbanization reduces exposure to environmental microbiota and its transfer indoors has rarely been examined. We investigated if the land use type around Finnish homes affects the diversity, richness, and abundance of bacterial communities indoors. Debris deposited on standardized doormats was collected in 30 rural and 26 urban households in and near the city of Lahti, Finland, in August 2015. Debris was weighed, bacterial community composition determined by high throughput sequencing of bacterial 16S ribosomal RNA (rRNA) gene on the Illumina MiSeq platform, and the percentage of four different land use types (i.e. built area, forest, transitional, and open area) within 200 m and 2000 m radiuses from each household was characterized. The quantity of doormat debris was inversely correlated with coverage of built area. The diversity of total bacterial, Proteobacterial, Actinobacterial, Bacteroidetes, and Firmicutes communities decreased as the percentage of built area increased. Their richness followed the same pattern except for Firmicutes for which no association was observed. The relative abundance of Proteobacteria and particularly Gammaproteobacteria increased, whereas that of Actinobacteria decreased with increasing built area. Neither Phylum Firmicutes nor Bacteroidetes varied with coverage of built area. Additionally, the relative abundance of potentially pathogenic bacterial families and genera increased as the percentage of built area increased. Interestingly, having domestic animals (including pets) only altered the association between the richness of Gammaproteobacteria and diversity of Firmicutes with the built area coverage suggesting that animal ownership minimally affects transfer of environmental microbiota indoors from the living environment. These results support the hypothesis that people living in densely built areas are less exposed to diverse environmental microbiota than people living in more sparsely built areas.