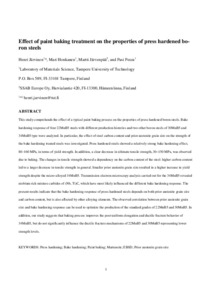 This study comprehends the effect of a typical paint baking process on the properties of press hardened boron steels. Bake hardening response of four 22MnB5 steels with different production histories and two other boron steels of 30MnB5 and 34MnB5 type were analyzed. In particular, the effect of steel carbon content and prior austenite grain size on the strength of the bake hardening treated steels was investigated. Press hardened steels showed a relatively strong bake hardening effect, 80–160 MPa, in terms of yield strength. In addition, a clear decrease in ultimate tensile strength, 30–150 MPa, was observed due to baking. The changes in tensile strength showed a dependency on the carbon content of the steel: higher carbon content led to a larger decrease in tensile strength in general. Smaller prior austenite grain size resulted in a higher increase in yield strength despite the micro-alloyed 34MnB5. Transmission electron microscopy analysis carried out for the 34MnB5 revealed niobium rich mixture carbides of (Nb, Ti)C, which have most likely influenced the different bake hardening response. The present results indicate that the bake hardening response of press hardened steels depends on both prior austenite grain size and carbon content, but is also affected by other alloying elements. The observed correlation between prior austenite grain size and bake hardening response can be used to optimize the production of the standard grades of 22MnB5 and 30MnB5. In addition, our study suggests that baking process improves the post-uniform elongation and ductile fracture behavior of 34MnB5, but do not significantly influence the ductile fracture mechanisms of 22MnB5 and 30MnB5 representing lower strength levels.