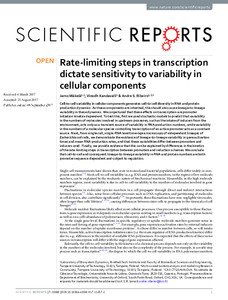 Cell-to-cell variability in cellular components generates cell-to-cell diversity in RNA and protein production dynamics. As these components are inherited, this should also cause lineage-to-lineage variability in these dynamics. We conjectured that these effects on transcription are promoter initiation kinetics dependent. To test this, first we used stochastic models to predict that variability in the numbers of molecules involved in upstream processes, such as the intake of inducers from the environment, acts only as a transient source of variability in RNA production numbers, while variability in the numbers of a molecular species controlling transcription of an active promoter acts as a constant source. Next, from single-cell, single-RNA level time-lapse microscopy of independent lineages of Escherichia coli cells, we demonstrate the existence of lineage-to-lineage variability in gene activation times and mean RNA production rates, and that these variabilities differ between promoters and inducers used. Finally, we provide evidence that this can be explained by differences in the kinetics of the rate-limiting steps in transcription between promoters and induction schemes. We conclude that cell-to-cell and consequent lineage-to-lineage variability in RNA and protein numbers are both promoter sequence-dependent and subject to regulation.