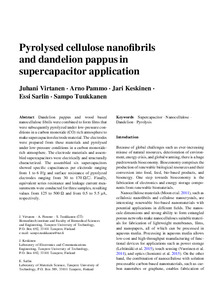 Dandelion pappus and wood based nanocellulose fibrils were combined to form films that were subsequently pyrolyzed under low-pressure conditions in a carbon monoxide (CO) rich atmosphere to make supercapacitor electrode material. The electrodes were prepared from these materials and pyrolysed under low-pressure conditions in a carbon monoxide-rich atmosphere. The electrode materials and assembled supercapacitors were electrically and structurally characterized. The assembled six supercapacitors showed specific capacitances per electrode ranging from 1 to 6 F/g and surface resistance of pyrolyzed electrodes ranging from 30 to 170 Ω/□. Finally, equivalent series resistance and leakage current measurements were conducted for three samples, resulting values from 125 to 500 Ω and from 0.5 to 5.5 µA, respectively.