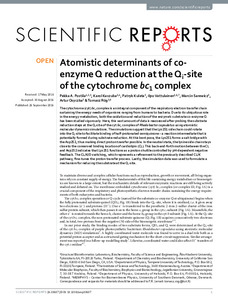 The cytochrome (cyt) bc 1 complex is an integral component of the respiratory electron transfer chain sustaining the energy needs of organisms ranging from humans to bacteria. Due to its ubiquitous role in the energy metabolism, both the oxidation and reduction of the enzyme's substrate co-enzyme Q has been studied vigorously. Here, this vast amount of data is reassessed after probing the substrate reduction steps at the Q i-site of the cyt bc 1 complex of Rhodobacter capsulatus using atomistic molecular dynamics simulations. The simulations suggest that the Lys251 side chain could rotate into the Q i-site to facilitate binding of half-protonated semiquinone-a reaction intermediate that is potentially formed during substrate reduction. At this bent pose, the Lys251 forms a salt bridge with the Asp252, thus making direct proton transfer possible. In the neutral state, the lysine side chain stays close to the conserved binding location of cardiolipin (CL). This back-and-forth motion between the CL and Asp252 indicates that Lys251 functions as a proton shuttle controlled by pH-dependent negative feedback. The CL/K/D switching, which represents a refinement to the previously described CL/K pathway, fine-tunes the proton transfer process. Lastly, the simulation data was used to formulate a mechanism for reducing the substrate at the Q i-site.