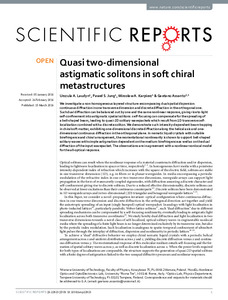 We investigate a non-homogeneous layered structure encompassing dual spatial dispersion: continuous diffraction in one transverse dimension and discrete diffraction in the orthogonal one. Such dual diffraction can be balanced out by one and the same nonlinear response, giving rise to light self-confinement into astigmatic spatial solitons: self-focusing can compensate for the spreading of a bell-shaped beam, leading to quasi-2D solitary wavepackets which result from 1D transverse self-localization combined with a discrete soliton. We demonstrate such intensity-dependent beam trapping in chiral soft matter, exhibiting one-dimensional discrete diffraction along the helical axis and one-dimensional continuous diffraction in the orthogonal plane. In nematic liquid crystals with suitable birefringence and chiral arrangement, the reorientational nonlinearity is shown to support bell-shaped solitary waves with simple astigmatism dependent on the medium birefringence as well as on the dual diffraction of the input wavepacket. The observations are in agreement with a nonlinear nonlocal model for the all-optical response.