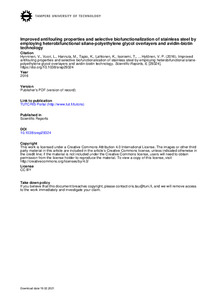 A straightforward solution-based method to modify the biofunctionality of stainless steel (SS) using heterobifunctional silane-polyethylene glycol (silane-PEG) overlayers is reported. Reduced nonspecific biofouling of both proteins and bacteria onto SS and further selective biofunctionalization of the modified surface were achieved. According to photoelectron spectroscopy analyses, the silane-PEGs formed less than 10 Å thick overlayers with close to 90% surface coverage and reproducible chemical compositions. Consequently, the surfaces also became more hydrophilic, and the observed non-specific biofouling of proteins was reduced by approximately 70%. In addition, the attachment of E. coli was reduced by more than 65%. Moreover, the potential of the overlayer to be further modified was demonstrated by successfully coupling biotinylated alkaline phosphatase (bAP) to a silane-PEG-biotin overlayer via avidin-biotin bridges. The activity of the immobilized enzyme was shown to be well preserved without compromising the achieved antifouling properties. Overall, the simple solution-based approach enables the tailoring of SS to enhance its activity for biomedical and biotechnological applications.