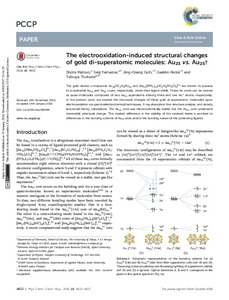 The gold cluster compounds Au38(SC2H4Ph)24 and [Au25(PPh3)10(SC2H4Ph)5Cl2]2+ are known to possess bi-icosahedral Au23 and Au25 cores, respectively, inside their ligand shells. These Au cores can be viewed as quasi-molecules composed of two Au13 superatoms sharing three and one Au+ atoms, respectively. In the present work, we studied the structural changes of these gold di-superatomic molecules upon electrooxidation via spectroelectrochemical techniques, X-ray absorption fine structure analysis, and density functional theory calculations. The Au23 core was electrochemically stable, but the Au25 core underwent irreversible structural change. This marked difference in the stability of the oxidized states is ascribed to differences in the bonding scheme of Au13 units and/or the bonding nature of the protecting ligands.