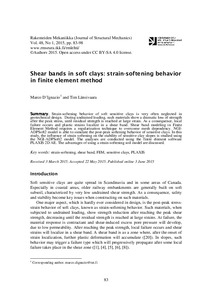 Strain-softening behavior of soft sensitive clays is very often neglected in geotechnical design. During undrained loading, such materials show a dramatic loss of strength after the peak stress, until residual strength is reached at large strain. As a consequence, local failure occurs and plastic strains localize in a shear band. Shear band modeling in Finite Element Method requires a regularization technique to overcome mesh dependency. NGI-ADPSoft2 model is able to simulate the post-peak softening behavior of sensitive clays. In this study, the influence of strain softening on the stability of sensitive clay slopes is studied using the NGI-ADPSoft2 model. The analyses are conducted using the finite element software PLAXIS 2D AE. The advantages of using a strain-softening soil model are discussed.