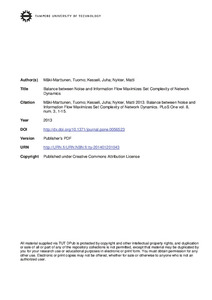 Boolean networks have been used as a discrete model for several biological systems, including metabolic and genetic regulatory networks. Due to their simplicity they offer a firm foundation for generic studies of physical systems. In this work we show, using a measure of context-dependent information, set complexity, that prior to reaching an attractor, random Boolean networks pass through a transient state characterized by high complexity. We justify this finding with a use of another measure of complexity, namely, the statistical complexity. We show that the networks can be tuned to the regime of maximal complexity by adding a suitable amount of noise to the deterministic Boolean dynamics. In fact, we show that for networks with Poisson degree distributions, all networks ranging from subcritical to slightly supercritical can be tuned with noise to reach maximal set complexity in their dynamics. For networks with a fixed number of inputs this is true for near-to-critical networks. This increase in complexity is obtained at the expense of disruption in information flow. For a large ensemble of networks showing maximal complexity, there exists a balance between noise and contracting dynamics in the state space. In networks that are close to critical the intrinsic noise required for the tuning is smaller and thus also has the smallest effect in terms of the information processing in the system. Our results suggest that the maximization of complexity near to the state transition might be a more general phenomenon in physical systems, and that noise present in a system may in fact be useful in retaining the system in a state with high information content.