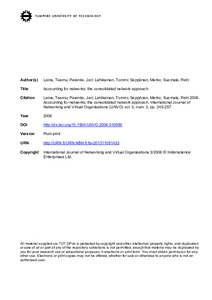 In the network economy, a profitability analysis based on the figures of one company is not sufficient to obtain an insight into the competitiveness of the whole network. In this paper, the basic ideas underlying the consolidated financial statement are analysed to determine its applicability for managing network profitability. The idea of the consolidated network is presented on the basis of a conceptual analysis, derived from research action in two company networks. Despite numerous barriers hindering adoption of a consolidated network, the idea of a consolidated view of business has received much positive feedback. The recognised benefits include value creation, profit calculation and profit‐sharing within the network. Using the consolidated network as a metaphor offers one way to communicate within supply chains as well as virtual organisations.