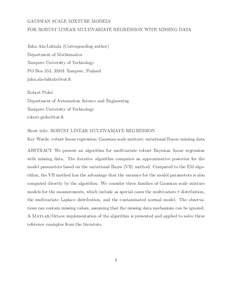 Communications in Statistics: Simulation and Computation

We present an algorithm for multivariate robust Bayesian linear regression with missing data. The iterative algorithm computes an approximative posterior for the model parameters based on the variational Bayes (VB) method. Compared to the EM algorithm, the VB method has the advantage that the variance for the model parameters is also computed directly by the algorithm. We consider three families of Gaussian scale mixture models for the measurements, which include as special cases the multivariate t distribution, the multivariate Laplace distribution, and the contaminated normal model. The observations can contain missing values, assuming that the missing data mechanism can be ignored. A Matlab/Octave implementation of the algorithm is presented and applied to solve three reference examples from the literature.