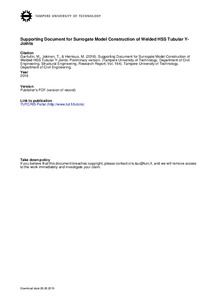 Tubular structures with welded joints are used in the wide range of structural applications. The most typical application is tubular trusses. The structural analysis model is frequently constructed using beam finite elements, and the braces are connected to the chords using hinges. In reality, the welded joint does not behave as a hinge when it is loaded by the moment. The joint has resistance against the moment, but in the joint area deformations may occur both at the brace and at the chord, so the stiffness against the moment has to be taken into account in the global analysis of the structure. In the EN 1993-1-8 (2005) only the moment resistance is given for the joint where the angle between the brace and the chord is 90 degrees. In (Grotmann and Sedlacek, 1998) there is the equation which can be used to calculate the initial rotational stiffness for the same case, angle 90 degrees.

When aiming to economic and environmental friendly design the stiffness of the joints must be taken into account. This is especially true when using high strength steel in structures, because then buckling at the ultimate limit state and deflections and vibrations in the serviceability limit state are often critical. In (Boel, 2010) and (Snijder et al., 2011) it has been shown that the rotational stiffness of the welded tubular joint is the main parameter when considering buckling of members of tubular trusses. However, this information is very limited, as given above.

Moreover, the fourth step is the fidelity validation, but it is not needed here