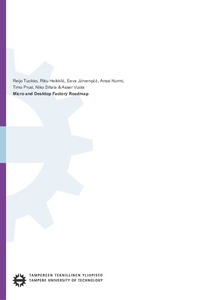 Terms desktop and microfactory both refer to production equipment that is miniaturized down to the level where it can placed on desktop and manually moved without any lifting aids. In this context, micro does not necessarily refer to the size of parts produced or their features, or the actual size or resolution of the equipment. Instead, micro refers to a general objective of downscaling production equipment to the same scale with the products they are manufacturing.

Academic research literature speculates with several advantages and benefits of using miniaturized production equipment. These range from reduced use of energy and other resources (such as raw material) to better operator ergonomics and from greater equipment flexibility and reconfigurability to ubiquitous manufacturing (manufacturing on-the-spot, i.e. manufacturing the end product where it is used). Academic research has also generated several pieces of equipment and application demonstrations, and many of those are described in this document.

Despite of nearly two decades of academic research, wider industrial breakthrough has not yet taken place and, in fact, many of the speculated advantages have not been proven or are not (yet) practical. However, there are successful industrial examples including miniaturized machining units; robotic, assembly and process cells; as well as other pieces of desktop scale equipment. These are also presented in this document.

Looking at and analysing the current state of micro and desktop production related academic and commercial research and development, there are notable gaps that should be addressed. Many of these are general to several fields, such as understanding the actual needs of industry, whereas some are specific to miniaturised production field. One such example is the size of the equipment: research equipment is often “too small” to be commercially viable alternative. However, it is important to seek the limits of miniaturisation and even though research results might not be directly adaptable to industrial use, companies get ideas and solution models from research.

The field of desktop production is new and the future development directions are not clear. In general, there seems to be two main development directions for micro and desktop factory equipment: 1) Small size equipment assisting human operators at the corner of desk 2) Small size equipment forming fully automatic production lines (including line components, modules, and cells) These, and other aspects including visions of potential application areas and business models for system providers, are discussed in detail in this roadmap.

To meet the visions presented, some actions are needed. Therefore, this document gives guidelines for various industrial user groups (end users of miniaturized production equipment, system providers/integrators and component providers) as well as academia for forming their strategies in order to exploit the benefits of miniaturized production. To summarise, the basic guidelines for different actors are:
• Everyone: Push the desktop ideology and awareness of the technology and its possibilities. Market and be present at events where potential new fields get together. Tell what is available and what is needed.
• Equipment end users: Specify and determine what is needed. Be brave to try out new ways of doing things. Think what is really needed – do not over specify.
• System providers / integrators: Organize own operations and product portfolios so that supplying equipment fulfilling the end user specifications can be done profitably.
• Component providers: Design and supply components which are cost-efficient and easy to integrate to and to take into use in desktop scale equipment.
• Academia: Look further into future, support industrial sector in their shorter term development work and act as a facilitator for cooperation between different actors.