What makes you over- or underconfident? Self-estimation in general knowledge test and its relation to personality traits and narcissism 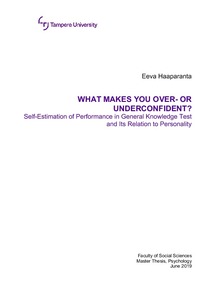 The first aim of this study was to gain information on how people self-estimate their performance in general knowledge questionnaire during a personnel assessment day. That is, do personnel assessment participants demonstrate overconfidence, underconfidence, or are they self-aware of their performance? Secondly, this thesis aimed at finding which personality traits may predispose individuals to over- or underconfidence.

This study was conducted in a real-life assessment center. Data was collected in 2019 by a Finnish HR-consulting company Psycon Corp. Sample collection occurred from March to April. Data collection was a part of a broader personnel selection procedure which aimed selection of candidates for expert and leader positions. Candidates participating personnel selection at Psycon were given a possibility to participate in the general knowledge questionnaire measuring over- and underconfidence specifically developed for this study. The final sample (n = 155) consisted of participants who filled in both the general knowledge questionnaire and personality inventories, including extraversion and neuroticism related sub-traits and narcissism. The studied personality traits were Narcissism, neuroticism related sub-trait Worrying & Self-criticism, and two extraversion related sub-traits of Need for Sociability & Company and Need to Lead & Decide.

Firstly, the candidates participating personnel assessment day estimated their performance accurately and, on average, did not demonstrate over- or underconfidence. Secondly, both Need for Sociability & Company and Narcissism associated with overconfidence when simple correlations and separate regression models were studied. However, it is notable that only neuroticism was related to self-estimation of performance in the final model, including all the personality variables. In conclusion, individuals scoring high in neuroticism typically underestimated their performance. Furthermore, individuals high in extraversion subscale or narcissism tend to be overconfident, but the associations were modest and, in this study, insignificant when tested in regression analysis containing multiple variables. Therefore, neuroticism demands attention when studying the "risk-factors" of underconfidence. When considering the opposite pole, overconfidence, extraversion, and narcissism are potential contributors, but according to this study, their predictive ability is at best modest.

Including self-estimation of performance, in other words, assessing biases towards under- or overconfidence, provides information of the potential thinking style a candidate views him-/her-self, how he/she embraces risks and what type of information he/she includes into evaluations before making decisions. Additionally, studying candidate’s over- and underconfidence may reveal aspects of optimism, self-view, self-efficacy, and self-awareness to mention a few possible explanations for under-/overconfidence. Methodologically this procedure brings incremental validity over and beyond traditional self-reports hence increases the predictive power of assessment battery. Assessing under- or overconfidence provides, therefore valuable information in the recruiting context. For example, neuroticism, coupled with the realistic self-estimation ability, may be a better fit to a position requiring high decision-making skills than neuroticism combined with underconfidence. Vice versa, individual high in narcissism (or extraversion) and with a realistic self-estimation ability may perform better in a position requiring risk management or high-quality decision making than an individual scoring high in narcissism (or extraversion) and overconfidence. Even though further studying is required to fully understand which factors lie under biased confidence and how these biases impact on work-related behavior assessment of over-/underconfidence provides interesting and additional information beyond self-reporting into personnel assessment battery.