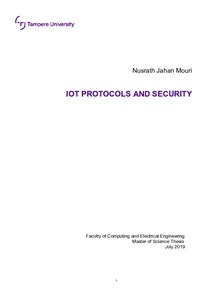 During the past years, there has been an exponential growth of internet connected devices all over the world. In future the growth of these devices is expected to grow at the higher rate. There are some studies estimating that Internet of Things (IoT) will be able to connects 500 billion devices by 2030. IoT smart devices are remotely accessible and are possible to control using existing network infrastructure.
At present, the usage of Internet of Things has increased rapidly. IoT is a dynamic global network between smart objects or things connected over the internet. IoT wireless network can connect anyone with anything at any place. With the rapid growth of IoT, security threats and vulnerabilities of the linked objects are also increasing continuously. Now, IoT security has become the most paramount technological research work over the world. The main objective of all IoT applications is to maintaining privacy and secure data transmission between devices. Due to the heterogeneous characteristics and constrained devices it is challenging to deploy security mechanisms in IoT compare to traditional network.
In this thesis, we highlight the importance of security in the IoT sector by studying a wide range of IoT security issues. Furthermore, we described several challenges derived from the existing IoT protocols and the security features of IoT protocols are also explained. In addition, implementation of UDP communication protocol and MQTT protocol using Contiki OS and Zolertia RE-Mote devices are added to the work. Cryptographic methods AES [1] and ECC [2] are described in the thesis and the implementation of AES-128 to secure device communication and ECC key generation process are also added to the thesis work.