Jump to content
View Item
JavaScript is disabled for your browser. Some features of this site may not work without it. 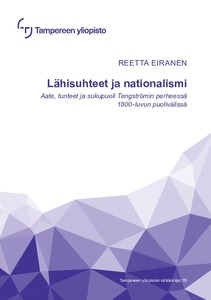 In my dissertation, I analyse how close relationships and nationalism intertwined in the intercommunication within the academic Tengström family in mid-nineteenth century Finland. The Swedish-speaking Tengström’s were a key family in the rise of Finnish nationalism, and their relationships and vast correspondence were crucial spaces for the emergence and shaping of Finnish national thought.

My dissertation focuses on the personal aspects of nationalism for both women and men – on experiencing the abstract phenomenon in lived reality. Gender and emotions are defined as the contact surface of nationalism and close relationships. The analysis of the Tengström group confirms that both men and women were important factors within the Finnish nationalistic networks. I contextualise the Tengströms’ conceptions of gender and emotions to the ideals of the European educated middle class.

The Tengström family was formed around the Hegelian mentor of the Finnish nationalistic movement, professor J. J. Tengström and his second wife Carolina Tengström. His first wife and the mother of his children was Sofia Magdalena af Tengström, daughter of Archbishop Jacob Tengström. The firstborn of the family was nationalistically promising Robert Tengström (1823–1847), who, however, died young. The daughters Sofi, Helene and Natalia Tengström got married to their brother’s ideological comrades, and through them the family attached itself to the rising estates and the new generation. The sons-in-law were linguists M. A. Castrén and Herman Kellgren and journalist Paavo Tikkanen. My research focuses especially on the family’s young generation, who matured during the upturn period of Finnish nationalism in the 1840’s and 1850’s.

The group biographical research setting focuses attention on the internal relations of the group and on their shared ideology. The main source of this study is the mutual correspondence of the Tengström family members. I analyse them as relational narrations which construct the self and the experience. The nationalistic experience was constructed and strengthened with gendered and emotive means.

In the forming of the Tengström family circle, a distinguished academic family connected itself with the century’s rising groups, that promoted the nationalistic cause. The family connections were tightened through mutual emotions and shared ideology. The family was an inspiring social surrounding for ideological activities and ”common causes”, like language studies, publishing, education and charity. Nevertheless, the gender differences and varying social backgrounds of the family members also played a role. The ‘national us’ was sketched against the inland Finnishness and foreign countries with a combination of admiration and alienation. For the young men of the family, the homosocial relationships and their inner emotional dynamics were important in the construction of the self and the career. A close friendship offered an emotional refuge. Older mentors, among them the father J. J. Tengström, were role models but there was also a need for separation from them. The careers of the young men were important for the continuity of the whole family, and they were associated with the family relations and the women’s support. The dynamics of the marriages leaned on the general ideals about gender and love, but they got national meanings in the mutual emotional relations and in child-rearing. After her husband’s death, Natalia Castrén dedicated herself to the national widowhood, which included cherishing his lifework and constructing the right kind of womanhood.

In the Tengström family, the intertwinedness of family relations and friendship relations with concrete, ideological activities was obvious. The intimate emotional relationships were resources in nationalistic activities and shaping of the self. They were not egoistically opposite to the common good but rather in line with it. For the Tengströms the love felt for the family members and for the fatherland intertwined.
The shared love for the fatherland strengthened the mutual feelings and vice versa. Both men and women were emotional and used intensive emotional register in their letters, which, in turn, was a way of constructing the emotions themselves. The analysis of both women and men within the context of the family reveals the women’s diverse forms of participation as well as the men’s dependence on their loved ones’ emotional and practical support. It seems that the Tengströms, in a way, tried to give a specific, national interpretation of the general gendered and emotional ideals.

The personal emotions and social relations were a central motivation and driving force in promoting the nationalistic cause, both in concrete activities and in living the gendered ideals. Reciprocally, the shared cause shaped and strengthened the self and the emotional bonds. Within the Tengström family, the close relationships and the nationalistic cause fused together.