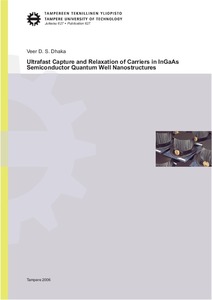 Development of high-speed electronic and optoelectronic devices based on semiconductor quantum wells requires clear understanding of the dynamics and kinetics of carrier transport and relaxation on an ultra short time scale. The carrier capture and the decay times are the two most important parameters that decide the dynamic performance of the devices. This Thesis is devoted to study the carrier dynamics in various MBE grown compound semiconductors, such as InGaAs/GaAs, InGaAs/InP and InGa(N)As/GaAs QW structures. The temporal evolution of non-equilibirium carriers in QWs samples was monitored using a femtosecond up-conversion technique.


The as-grown QW structures show decay time values ranging from 500 to1000 ps, which is far too long for ultrafast operations. The aim of this study was to make the semiconductors faster by reducing this decay time values to sub-picosecond levels using the ion implantation technique and to investigate systematically the influence of intentionally created defects and post-irradiated annealing on carrier capture and relaxation process in a wide range of QW samples. The effect of different ion species, implantation energy, dose and annealing on decay and capture processes are studied in detail. The main findings are that sub-picosecond lifetimes of choice could be achieved in InGaAs/GaAs and InGaAs/InP structures at appropriate dose, implantation energy, and annealing conditions. We have observed that heavy ion created defects are not thermally stable with time for a certain period after the irradiation and show room temperature ageing. Among the different light and heavy ions used for implantation, irradiation with Ne+ ion was found to be considerably more effective than the others, which is a good alternative to the more traditional Ni+-irradiation.


The QWs collect only those carriers, which are created near the QW interfaces. The capture as well the decay time was found to decrease with the dose. Annealing was found to increase the lifetimes appreciably in all the irradiated structures but the capture profile of carriers in the QW was found to be independent of annealing in almost all of the structures studied. This suggests that ion implantation creates shallow traps near the barrier and QW region and deep centers far from the barriers. Mainly the shallow traps affect the capture dynamics, while mainly the deep traps affect the decay of carriers. The QW samples prepared and studied in this Thesis were aimed for the active region of SESAMs devices. Furthermore, the comprehensive details and mechanism for carrier transport and relaxation in QW heterostructures is investigated in depth. Precise values of decay and capture time for InGaAs/GaAs, InGaAs/InP, and InGa(N)As/GaAs samples are reported with irradiation dose, light and heavy ion species, implantation energy, MBE growth temperature and annealing as the main parameters.