Studies on the Time-Dependent Demagnetization of Sintered NdFeB Permanent Magnets 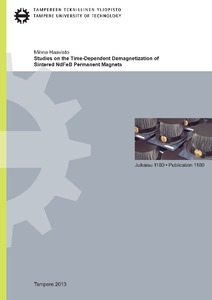 Increasing utilization of sintered NdFeB permanent magnets in large electrical machines has raised the question about the thermal stability and possible polarization losses occurring during the long-term operation of the machines. Knowledge of the evolution of the magnetic properties of NdFeB compounds over time at elevated temperatures has been limited. This causes difficulties in the optimization of the magnetic material selection.

In this work the polarization losses occurring in commercial sintered NdFeB magnets during long-term thermal exposures are studied. The influence of different parameters such as temperature, permeance coefficient of the sample, coercivity and JH curve squareness of the material, are examined. Also the influence of a stabilization heat treatment is studied. The losses detected in open- and closed-circuit exposures are compared. The demagnetization process is analyzed with the help of finite element modeling.

The detected polarization losses were found to follow the logarithmic decay law in the time scale from 1 hour to 10 000 hours. By assuming the behavior to continue also over the next decade of the logarithmic time scale, the losses can be extrapolated even to 30 years. For each material and each Pc it is possible to determine a temperature at which the total loss is expected to be less than 1 % even after 30 years of exposure. Above this critical temperature, the time-dependent losses start to increase. In open-circuit exposures also the initial loss after 1 hour exposure increases rapidly with increasing temperature or decreasing Pc. In open-circuit exposures, the total loss estimated to occur after 30 years was roughly twice the loss detected after 1 hour. However, in closed-circuit exposure this was not the case. The time-dependent demagnetization was found to be more severe in the close-circuit condition. This is likely to result from the acceleration of a chain reaction type demagnetization process. In open-circuit exposures the time-dependent demagnetization process is likely to be damped, since the demagnetizing self-field is reduced during the process.

The results show that the best way to control the time-dependent demagnetization is to use materials with a square JH curve. For this type of a material, the critical temperatures are easy to determine. The stabilization heat treatment is found to stabilize the magnets, but for a limited period of time only. An FEM analysis shows that the partial demagnetization applied to the magnets during the stabilization heat treatment is not homogenously distributed. The treatment needs to be performed in closed-circuit conditions to get a homogeneous stabilization.

The detected time-dependent demagnetizations are due to the material characteristics as well as to the magnetostatic field effects. It is difficult to distinguish the proportion of these two. The comparison between the open- and closed-circuit test results suggests that the open-circuit results can be used to estimate the long-term behavior of the material. However, more studies are needed to confirm this.