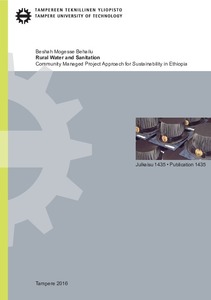 Water is a natural need and basic requirement of humankind. Civilization, human settlements, establishments of industry, and locations of agricultural farms have been linked to the presence of water sources. However, the availability of freshwater resources is gradually becoming more challenged by climate change, and service production is being inﬂuenced by several factors, including population growth and service breakdowns. A potable water supply for all is unquestionable for enhancing development, education, economies, and social performance. Moreover, sanitation is mandatory for maintaining clean and potable water supply sources. Striving to improve water and sanitation services and focusing on service delivery are fundamental to societies’ overall wellbeing.

The concept of service delivery extends beyond investment in the initial implementations of systems. Instead, it includes sound operation and maintenance of facilities and ensures availability of services throughout the lives of the built systems. Service delivery endeavours are overwhelmed by the implementations of new systems because most of the actors in the sector are actively building new schemes instead of rehabilitating existing ones. Therefore, the tendency in service coverage often means moving two steps forward and one step back because of service failures. To overcome this challenge, the future paradigm should be to intensify the service delivery and make it as important as the implementation of new systems. Stakeholders, particularly user communities, should be involved in every step of the process of implementing the systems that serve them to establish feelings of ownership and to give them active roles during post-construction.

The objective of this study is to obtain insight into service delivery in which the user community is at the centre of service production. It assesses the effects and effectiveness of the Community Managed Project Approach (CMP) in Ethiopia. The study was conducted in the Amhara and Benishangul-Gumuz regions in northwest Ethiopia. These regions were selected because of the presence of CMP and the availability of other implementation approaches for comparison. Data were collected using numerous methods, such as household surveys (n = 1806), focus groups (n = 49), ﬁeld observations (n = 49), and personal interviews with governmental officials at the district, regional, and federal levels (n = 7). Based on these data, four peer-reviewed journal articles and one international peer-reviewed conference paper were published.

The results of this study indicate that community management is a preferable way to extend water supply and sanitation services in rural areas. The participation of user communities should be managed so that genuine participation leads to feelings of ownership. However, all types of participation (labour, ﬁnancial, and material contributions) are not always possible to achieve ownership. In some circumstances, the concept of participation might be abused, which might lead to forced involvement. In that case, the dream of community participation might not be realized. Regarding this, CMP has remarkably performed for reaching and involving user communities. To create strong, cohesive, and collective actions, exploring local experiences is crucial. For example, the traditional water management of the Borana and Konso communities in southern Ethiopia are signiﬁcantly more sustainable than the modern systems built in these areas because of the philosophical differences in management between the community schemes and the introduced schemes.

This study suggests that a wide variety of perspectives on service provision and production should be considered. Community participation should be clearly deﬁned and sensibly implemented. Failure of community participation in the process of building community management might be due to technical experts’ lack of understanding of the reasons that a community should be involved and to citizens’ resistance. Several factors are identiﬁed as reasons for frequent service failures in rural water supply, including institutional and social aspects. Therefore, understanding the factors behind the problems, incorporating social capital, and engaging traditional knowledge could improve efforts to sustain service delivery.