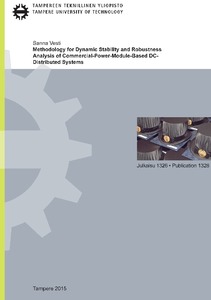 The purpose of this thesis is to present dynamic small-signal stability and performance analysis methodology for dc-distributed systems consisting of commercial power modules. Furthermore, the objective is to introduce simple method to state the least conservative margins for robust stability as a single number. In addition, an index characterizing the overall system stability is obtained, based on which different dc-distributed systems can be compared in terms of robustness.

The interconnected systems are prone to impedance-based interactions which might lead to transient-performance degradation or even instability. These systems typically are constructed using commercial converters with unknown internal structure. Therefore, the analysis presented throughout this thesis is based on frequency responses measurable from the input and output terminals. The stability margins are stated utilizing a concept of maximum peak criteria, derived from the behavior of impedance-based sensitivity function that provides a single number to state robust stability. Using this concept, the stability information at every system interface is combined to a meaningful number to state the average robustness of the system. In addition, theoretical formulas are extracted to assess source and load side interactions in order to describe detailed couplings within the system. The presented theoretical analysis methodologies are experimentally validated throughout the thesis.

In this thesis, according to the presented analysis, the least conservative stability margins are provided as a single number guaranteeing robustness. It is also shown that within the interconnected system the robust stability is ensured only if the impedance-based minor-loop gain is determined at the very input or output of each subsystem. Moreover, a complete set of impedance-type internal parameters as well as the formulas according to which the interaction sensitivity can be fully explained and analyzed, is provided. The given formulation can be utilized equally either based on measured frequency responses, time-domain identified internal parameters or extracted analytic transfer functions.

Based on the analysis methodologies presented in this thesis, the stability and performance of interconnected systems consisting of converters with unknown internal structure, can be predicted. Moreover, the provided concept to assess the least conservative stability margins enables to obtain an index to state the overall robust stability of distributed power architecture and thus to compare different systems in terms of stability.