Binding Affinity and Mechanism of Polymer-DNA Polyplexes for Gene Delivery 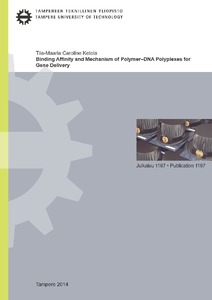 The mechanism of polyethylenimine−DNA, poly(L-lysine)−DNA, peptide–DNA, and PBAE–DNA complex formation was studied by a time-resolved spectroscopic method. The data were analysed by a cooperative model for multivalent ligand binding to multisubunit substrate. The formation of polyplexes with polyethylenimines, poly(L-lysine) and peptide (KK)₂KGGC is observed to be positively cooperative and negatively cooperative with PBAEs. Polymers with positive cooperativity reach about 100% saturation in binding DNA, whereas for polymers with negative cooperativity, the saturation level remains at about 80–90%. The type of amine groups (primary, secondary and tertiary) of the polymers has an effect on the binding constants and the degree of cooperativity.

The effects of pH, type of amine groups and polymer structure on the mechanism of the polyplex formation were studied with polyethylenimines (PEI) and poly(L-lysine) (PLL). At pH 5.2 and 7.4 for PEIs and PLL, the formation of the polyplex core was observed to be complete at N/P = 2, at which point nearly all DNA phosphate groups were bound by polymer amine groups. At higher N/P ratios, excess polymer binds to the core polyplex, forming a shell over the core. At pH 9.2, the core is formed at higher N/P ratios than at lower pH levels except for PLL, which behaves similarly at all pH levels. The overall cooperative binding constants are higher at pH 5.2 than at 9.2 due to the higher degree of amine group protonation at lower pH levels.

The ionic strength and pH affect the binding mechanism with peptide (KK)₂KGGC polyplexes, but changing the buffer does not. Molecular weight shows a clear effect on the mechanism and efficiency of the polyplex formation: for the high-molecular weight polymers (BPEI and PLL), the saturation level is reached at lower N/P ratios than for low-molecular weight polymers (SPEI and peptide). In the absence of excess PEI, the transgene expression levels are lower than in the presence of it. However, the fluorescence properties of the polyplexes in the absence and the presence of excess PEI are similar. Hence, the original structure of the polyplex core is retained during the shell formation.

For PBAEs without end caps, the highest saturation levels and overall binding constants were observed for the linear backbones and side chains when the number of carbons was four or five, respectively. The end-capping of PBAEs increases the amine density and the efficiency of polyplex formation, which is observed as higher saturation levels for the end-capped PBAEs. The presence of an OH-group in the end cap induces a change in the binding mechanism. The length of the backbone and the side chain of PBAEs were observed to be important via amine density, hydrophobicity and steric hindrance to the complex formation. High-molecular weight PBAEs formed polyplexes more effectively than smaller ones.