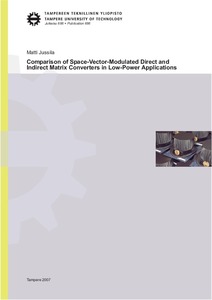 
The space vector theory is used for the explicit presentation of matrix converter modulation. In addition, some space vector modulation methods are compared from the point of view of the power losses and the output common-mode voltages produced. The space vector approach is used to analyse the migration of supply voltage distortion to output and its reflection back to the supply side. Three computationally simple methods for mitigation of the distortion migration are also compared. These new analytical results are confirmed by simulations and measurements: the distortion migration can be mitigated but not removed totally and the mitigation also increases the complexity of control and decreases supply current quality.