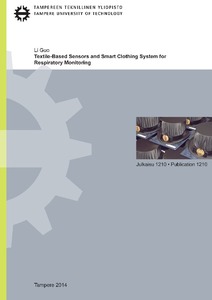 Long-term respiratory monitoring provides valuable information for diagnostic and clinical treatment. Traditional measures of respiration require a mouthpiece or a mask, neither of which can be used as ubiquitous healthcare equipment. Using a smart clothing system seems to be a better alternative. Researchers in the field of smart textiles have focused on the development of health-related products since the 1990s, and textile-based sensors used for respiratory measurements have been discussed in several projects. Although the soft and flexible characteristics of textile-based sensors make them attractive, the flexibility of the materials also affects the signal quality. In a laboratory situation, where each sensor is tested as a single element, this is not as critical as in a user situation, where the sensor is integrated into the clothing and worn by different users engaging in different activities.
The principal objective of this thesis was to explore the possibility of performing reliable respiratory monitoring using a clothing platform. The research began by investigating the possible methods and materials that can be used to produce textile-based sensors for respiratory monitoring applications. The aim was to determine the most suitable method for integrating the sensing function into the clothing system. Study results have shown that sensors made with a conductive coating demonstrated superior performance in terms of sensitivity, stability, and reliability. Therefore, five prototype systems based on conductive coating technique were developed. Sensor placement, signal collection techniques, and the clothing system configuration were the main concerns, while issues related to the sensor wearability, maintenance, and aesthetic appearance, as well as the environment and health, were also discussed. Knitting was found to be the most economical method for producing the textile-based sensors; however, sensors made of knit fabric do not perform as well as the coated ones. Therefore, elastic-conductive hybrid yarns have been created to improve the electro-mechanical properties of knitted-based sensors, and eventually, a prototype with two sensors and a built-in data-bus was made by fully-fashion knitting technique. Two smart clothing system prototypes, based on conductive coating technique, were tested systematically by ten subjects. The first prototype consisted of one sensing element, and the results show that the smart clothing system could successfully monitor the subjects’ breathing patterns during sitting, standing, and different forms of running. The system has also proven to be useful in the observation of sleep apnea disorder symptoms. The second prototype consisted of two sensing elements. Apart from all the characteristics of the first prototype system, a system with two sensing elements can be used to determine the relationship between the rib cage and abdomen compartments, which provides information for certain diseases, e.g., cardiac arrhythmias. The second smart clothing system prototype was compared with a conventional respiratory belt for validation. Signals from the clothing system and the respiratory belt were collected simultaneously with a self-designed LabVIEW program, and further processed with MATLAB. Quantitative analyses were conducted based upon different comparison techniques, such as Pearson’s correlation, ANOVA and Fast Fourier Transform analysis. The results demonstrate that the smart clothing system can provide reliable respiratory measurements, with signals of comparable quality to the conventional respiratory belt. In addition, the wearability and user acceptance were studied by means of a survey. The survey results indicate that users were more comfortable with the smart clothing system and that most believe that using a smart clothing system will improve both health condition and quality of life.