Computational Modelling of Membranes Rich in Cardiolipin and Sterols 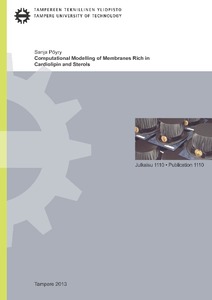 This work focuses on the properties of model membranes rich in two lipids: cholesterol and cardiolipin. Despite being structurally very different, the biological significance of both of these lipids is partly related to their ability to promote order in lipid membranes.
The studies presented here explore the function of these two lipids in membrane environments by use of atomic-scale molecular dynamics simulations.

The first study concentrates on the properties of cholesterol and related sterols. The question as to whether the structure of cholesterol could be optimized by removing certain methyl groups is tackled by examining the effect of several modified sterols on general lipid bilayer properties. The results indicate an important role for the methyl groups and speak against calling them molecular fossils.

The studies involving cardiolipin comprise three parts. At first, the influence of salt on general properties of cardiolipin-rich membranes is described. The field of research is subsequently broadened to include the interplay of cardiolipin with membrane-associated proteins: a membrane-embedded protein complex and\ a membrane-attacking antimicrobial peptide.

The results show that cardiolipin amplifies some of the effects that salt has on membranes, particularly through restricting the dynamics of the other lipids' head groups. More generally, the presence of salt seems to mainly affect the dynamic properties of the bilayer, whereas changes in the structural properties are rather small.
In the case of the protein embedded in a cardiolipin-rich membrane, three cardiolipin molecules are observed to freely diffuse to locations near the active sites of the protein. Notably, the locations are similar to those seen in crystal structures. When located in these spots, cardiolipin may participate in the proton uptake of the complex. The evidence supports the integral role of cardiolipin in the structure and function of this membrane protein.
Finally, in the study involving antimicrobial peptides, the cardiolipin-rich membrane is observed to respond to the peptide attack by increasing membrane curvature. Notably, the bilayer structure is never broken, i.e. no lysis is observed. This may indicate a possible mechanism with which cardiolipin would be able to protect microbial membranes against the attacks of antimicrobial peptides.

In summary, this work provides novel views on the functions of two vital lipids, cholesterol and cardiolipin, with use of atomic-scale molecular dynamics simulations.