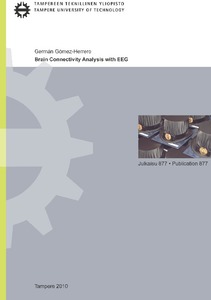 A problem when studying functional brain connectivity with EEG is that electromagnetic volume conduction introduces spurious correlations between any pair of EEG sensors. The traditional solution is to map scalp potentials to brain space before computing connectivity indices. The fundamental pitfall of this approach is that the EEG inverse solution becomes unreliable when more than a single compact brain area is actively involved in EEG generation. This thesis proposes an analysis methodology that partially overcomes this limitation. The underlying idea is that the inverse EEG problem is much easier to solve, if tackled separately for functionally segregated brain networks. The reason is that each of these EEG sources are likely to be spatially compact. In order to separate the contribution of each source to the scalp measurements, we use a blind source separation approach that takes into account that the sources, although functionally segregated, are not mutually independent but exchange information by means of functional integration mechanisms. Additionally, we also introduce a new set of information theoretic indices able to identify transient coupling between dynamical systems, and to accurately characterize coupling dynamics.

The analysis techniques developed in this thesis were used to study brain connectivity underlying the EEG-alpha rhythm, in a population of healthy elderly subjects, and in a group of patients suffering mild cognitive impairment (MCI). MCI is a condition at risk of developing to dementia and often a pre-clinical stage of Alzheimer's disease. The results of the analysis for the control population were in agreement with the previous literature on EEG-alpha, supporting the validity of the analysis approach. On the other hand, we found consistent connectivity differences between controls and MCIs, giving weight to the hypothesis that neurodegeneration mechanisms are active years before a patient is clinically diagnosed with dementia. Prospectively, these new analysis tools could provide a rational basis for evaluating how new drugs affect neural networks in early degeneration, which might have far-reaching implications for therapeutic drug development.