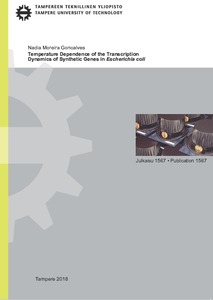 One of the major current goals in synthetic biology is the design of genetic components with more predictable functions. This predictability, however, does not depend solely on these components, but also on the environment where they will be inserted in.

Escherichia coli is one of the most studied microorganisms in Microbiology, and it is commonly used in Synthetic Biology as a host strain to test the functioning of the components of genetic systems. These components are typically well characterized under controlled laboratory conditions. However, it is unclear how unfavorable environmental conditions, such as temperature fluctuations, can affect their functionality and robustness.

In this thesis, we investigated how temperature affects the kinetics of transcription activation and subsequent dynamics of RNA production of synthetic genes in E. coli. For this, we made use of state-of-the-art in vivo single RNA-detection techniques and image analysis tools, to dissect, at the single-cell and single-RNA level, the kinetics of the rate-limiting steps in transcription, as well as the intake kinetics of inducer molecules. In addition, we analyzed how the temperature dependency is affected by the promoter structure.

Specifically, first, we characterized the intake kinetics of inducer molecules, from the media to the cell periplasm and then cytoplasm, at optimal and suboptimal temperatures. We found that, for a wide range of extracellular inducer concentrations, and in the absence of a transporter protein, the intake process is diffusive-like. The results also show that, the mean intake time increases nonlinearly with decreasing temperature, likely due to the emergence of additional rate-limiting steps at low temperatures. Finally, our results indicate that the dynamics of this intake process affects significantly the expected RNA numbers in individual cells for a significant amount of time following induction and, thus, the overall distribution of RNA numbers of the cell population.

Next, we studied the temperature dependence of the dynamics of transcription initiation of a synthetic gene, engineered from a viral promoter. This dependency is shown to occur at the level of the underlying kinetics of the rate limiting steps in initiation. From the analysis of the empirical data, we found that, first, similarly to E. coli promoters, the T7 phage Phi 10 promoter exhibits more than one rate-limiting step during initiation. Also, the mean time-length of these steps is temperature dependent. However, contrary to E. coli promoters, the noise in RNA production increases with increasing temperature within the range of temperatures tested.

Finally, we investigated a key mechanism of transcription, namely, the robustness of a transcription repression mechanism by analyzing the rate of ‘leaky’ transcription events, i.e., RNA production events when under full repression. Using the LacO3O1 as a model promoter, from the analysis of the empirical data on single RNA production kinetics, we found that this promoter exhibits a leakiness rate that is higher at low temperatures, suggesting that its repression mechanism is less efficient under these conditions.

We believe that the studies presented here contribute to a better understanding of how temperature affects the transcription dynamics of synthetic genes in environments where temperature fluctuations occur. Since the acquired knowledge is of use to better understand the behavior of synthetic promoters, we expect our main contribution to be in the area of Synthetic Biology, namely, to be of value in predicting the robustness of future synthetic genetic circuits to temperature shifts. In particular, our results show that, in the genes studied, the repression mechanism is the most affected by temperature. This strong temperature dependence translates into the hindering of the promoter responsiveness to induction at sub-optimal temperature conditions. Additionally, our results suggest that this temperature-dependence of the robustness and responsiveness can be tuned, which indicates that it is possible to engineer synthetic promoters of higher response accuracy for a wider range of environmental conditions than those studied here. This knowledge can be used in the construction of synthetic genetic circuits with a more predictable, robust behavior.