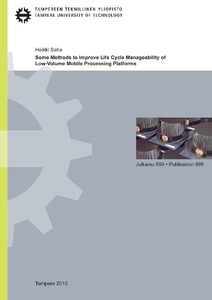 The life cycles of mobile control electronics are significantly longer than in the mainstream electronics. The low production quantities and high number of product variants together with long life cycles has led to scattered production volumes. Producing low quantities is expensive and inefficient and component obsolescence causes high maintenance costs during the life cycle of each control product. Increasing use of distributed sensors and actuators has improved the functional re-use, but has not solved the maintenance of the application processing platforms. Moreover increased use of networking has pointed out some constraints of the current field buses. AD-interfaces in the application processing platforms form another challenge due to the different application requirements.
Hubs and switches have been widely used in computer networks to solve the network constraints. The use of the same principles has been investigated with the standard high-speed physical layer of CAN. Due to the different bus access scheme, a thorough behavioral physical layer analysis was required. The problematic occurrences found in the theoretical analysis were proved with prototypes and real networks. The same tasks were performed for LIN to find out the effect of the different bus systems. The problem of the AD-interfaces has been solved by implementing and evaluating reconfigurable ADC implemented with the combination of FPGA and FPAA. To get a proper view of the possibilities, two main platforms and two conversion principles were evaluated.
Active CAN hub and switch can significantly move the constraints of current CAN networks. More flexible topologies can be implemented without baudrate restrictions and violating the standard physical layer. Advanced condition monitoring and fault isolation features are provided by both active hub and switch. Because of the differences between CAN and LIN, the physical layer constraints of LIN can be reduced only with a multiport interface embedded into the master node. According to the case implementations, reconfigurable hardware is required to support all the alternative structures.
Mobile processing platforms interface with the analog world and most of the analog outputs are pulse width modulated, which can be supported by reconfigurable digital hardware, CPLDs and FPGAs. The flexibility of the mixed-signal platforms can also be spread to cover the analog inputs by utilizing the reconfigurable mixed-signal hardware, FPAAs. The concept of reconfigurable ADC has been proved in this thesis with two different AD conversion principles implemented into two existing hardware platforms. Despite the hardware differences, generic ADC-functions were successfully implemented.
Fully customizable standard hardware expects full reconfigurability from the platform. CPLDs and FPGAs have already supported the approach in the digital systems, including network hubs and switches. Using FPAAs together with FPGAs provides the same flexibility to the mixed-signal platforms needed in the mobile control systems. The hardware flexibility enables efficient higher volume production of the control electronics, because the same platforms can be adapted to any application of any system integrator without physical hardware modifications. Furthermore, the flexible hardware can be shared with multiple platform generations.