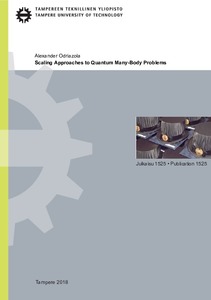 In the present thesis, we will focus on a less studied aspect of Thomas-Fermi theory: the highly non-trivial scaling relations following from it. The main objective of this thesis is to introduce this scaling approach, not as a method to solve the many-body problem, but as an efficient way of organizing the information contained in its solution in order to extract yet more – sometimes non-trivial – information. To this goal we apply the scaling approach to a wide range of system, from nanostructures (quantum dots) to atoms and atomic ions.

In all cases, we not only showed the functional form of the scaling relations, but we also provided explicit analytical expressions for the scaled quantities. Such expressions are not simple by-products of the approach, but approximations that can be used for estimating relevant quantities with practically no computational cost. Furthermore, the obtained scaling relation may serve as a starting point for the improvement of more elaborated theories, for example, in the optimization of density functionals within density functional theory.

The above results are reported in four publications which constitute the basis of the thesis.