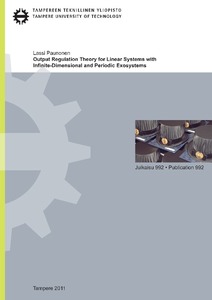 In this thesis we consider the output regulation problem consisting of choosing a controller to asymptotically steer the output of a linear infinite-dimensional system to a given reference signal despite external disturbances. In particular we are interested in a situation where the considered reference and disturbance signals are nonsmooth polynomially bounded functions. The existing theory on this problem can only be used in the case where the signals to be tracked and rejected are smooth and polynomially bounded, or nonsmooth but uniformly bounded functions. The availability of more general reference and disturbance signals is useful in many applications such as the control of robot arms and disk drive systems.

The first main result of this thesis is the generalization of the well-known internal model principle of finite-dimensional control theory for distributed parameter systems with infinite-dimensional exosystems. On a general level this result states that in order for a controller to solve the robust output regulation problem related to a given signal generator, the controller must be able to reproduce the dynamics of this exosystem. In addition to its theoretical significance the internal model principle can also be applied in the construction of controllers solving the robust output regulation problem. Our proof of this result is based on a close connection between the behavior of the state of the closed-loop system and an associated Sylvester operator equation. In particular, the controllers achieving asymptotic tracking of the reference signals can be characterized using the solvability of certain constrained Sylvester equations, and the robustness of this property can be expressed as a condition involving equations of this type.

The second main contribution of this thesis consists of the development of the theory of output regulation for infinite-dimensional systems with periodically time-dependent exosystems. In particular this also includes designing nonautonomous controllers achieving asymptotic output tracking and disturbance rejection. Our treatment shows that it is possible to study the output regulation problem for a distributed parameter system together with a nonautonomous exosystem using methods similar to the ones familiar from case of a time-invariant signal generator. In particular, the solvability of the problem related to a given periodic exosystem can be characterized using a periodically time-dependent version of the well-known regulator equations if the associated Sylvester operator equation is replaced with an infinite-dimensional Sylvester differential equation.