Thinking Design: Towards an Architecture of Critical Indeterminacy and Temporal Affectivity 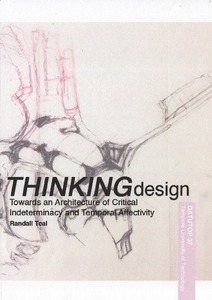 The legacy of Platonic thought and education in the West has led to a narrowing of what we call “thinking.” In particular, this legacy has led to modes of thinking that overvalue linear logic, objective facts, and universal constants, overlooking those human capacities whose results are difficult to measure because they cannot be quantified. However, architecture is a discipline that necessarily depends upon understanding those experiences that are temporal, affective, ephemeral, relational, embedded, lived, and felt. Architectural thinking overcomes scientific rationalism only through the realization that architectural significance can be found also in the indeterminacy of poetic understanding, which “communicates” via analogical language—the language of temporal affectivity.

This study aims to better understand creative thinking both generally and in the context of architecture, focusing on specific questions about the self-imposed limits that are typically placed upon what we call “thinking” and how to better stimulate the agilities of creative thought in architecture. In order to be congruent with the critique of a pervasive mathematical syntax, the methods and results of study strive to remain poetic in nature; in other words, this is a theoretical exercise whose insights are measured rhetorically through the correlation of various pieces of “circumstantial evidence” structured by an argument that succeeds or fails through its persuasive force alone. This evidence is built from anecdotes, examples and arguments, and structured through conversations with the thinking of philosophy and architecture; of particular importance in this study are philosophers Martin Heidegger, Gilles Delueze, and Gilbert Simondon, and the Finnish architect Reima Pietilä.

This is an argument for designing more supple, sensitive, and resilient modalities of thinking: thinking that is not solely aimed at creating better buildings, but also at carving out new areas of influence for architectural thinking in society. It is an argument that contends that simplistic absolutism in architectural movements and trends will only continue to promote fallacies about education, thinking, and the measures of architectural worth. It is an argument that believes architects must prioritize development of those critical, non-instrumental skills that sometimes the profession even forgets that it needs. It is an argument that believes that this process begins through an intensive familiarization and attunement to the affective-poetic syntax of temporal encounter, becomes possible when “creators” are nimble, inclusive, optimistic, and expansive, and can be subsumed in the maelstrom of problem and prospect—the design process—and leads to a temporal-material-spatial language of architecture that is most purely and powerfully architecture.