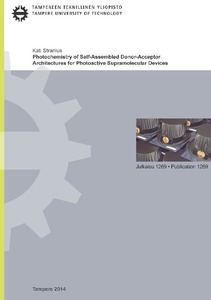 Supramolecular donor-acceptor assemblies were prepared and studied with spectro-scopic methods. The two main objectives of this work were: (i) fundamental study of photoinduced energy and electron transfer processes in self-assembled supramolecular donor-acceptor complexes in solutions and (ii) self-assembly and photophysical characterization of donor-acceptor ﬁlms on titanium dioxide (TiO2) surface. The study of these systems aims to develop more complex architectures for artificial photosynthesis and understand factors that affect efficiency of the photoinduced energy and electron transfer processes in natural and artificial photosynthesis. This knowledge can be used for building photoactive molecular devices such as organic solar cells.

The singlet excited state energy transfer in dyads formed via axial metal–ligand coordination of free-base porphyrin to metal (Mg, Ru) complexes of pthalocyanine was observed. The position of imidazole linker group on one of the meso-aryl groups of the free-base porphyrin was used to tune the rates of energy transfer. The two-point binding provides better control over complex geometry and it was implemented utilizing metal-ligand and crown-ether coordination in zinc chlorin–fullerene supramolecular dyads. This approach allowed to increase the binding efficiency and achieve a well-deﬁned mutual orientation between the moieties. The electron transfer rate was found to depend on the donor-acceptor distance as well as the mutual orientation of the entities and could be manipulated by changing positions of binding groups.

The donor-acceptor layers were assembled on TiO2 using two methods. First, a layer of covalently linked porphyrin-pthalocyanine dyads was formed on TiO2 via supramolecular approach. Then, a new method was developed to construct donor-acceptor two-layer films using separate porphyrin and fullerene molecules. In both cases, photo-excitation of donor molecules resulted in charge-separation (CS) inside the organic layer and sequential electron transfer towards the TiO2. Furthermore, the charge recombination (CR) process was found to be slower than for systems sensitized with single chromophores.