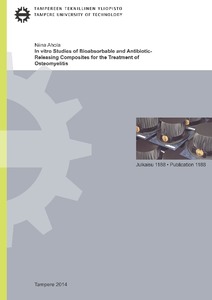 Osteomyelitis is a severe bacterial infection that is considered to be one of the most-difficult-to-treat infections. It causes the destruction of bone tissue and the treatment often includes surgical debridement that creates a defect in the bone. Because there may be bacteria left in the surrounding tissues, long courses of antibiotics are also required. Adequate antibiotic concentrations using oral or intravenous antibiotics may be difficult to achieve because of degenerated blood circulation. Local antibiotic delivery using implanted antibiotic-releasing materials in the defect site provides an efficient way of achieving high local antibiotic concentrations, and also decreases the side-effects that are often associated with oral or intravenous antibiotics.
The objective of this thesis was to develop bioabsorbable and antibiotic-releasing (either rifampicin or ciprofloxacin) composite materials that can be used for the local antibiotic treatment of osteomyelitis and that also include a osteoconductive ceramic component to aid bone healing. Continuous antibiotic delivery for three to six months was requested. The materials developed are to be used together so that the surgeon can decide in which ratio to use them. The materials chosen for the study were medical grade poly(L-lactide-co-ε-caprolactone) as the bioabsorbable polymer matrix, β-tricalcium phosphate (β-TCP) as the osteoconductive ceramic component, and the antibiotics ciprofloxacin and rifampicin that are clinically used as a combination in the treatment of osteomyelitis. All the materials used are approved for clinical use. Ten different composites of these materials plus plain poly(L-lactide-co-ε-caprolactone) were processed using extrusion and cut into pellet shaped samples (diameter approximately 2.5 mm and length 2.5 mm). Four of the composites had no antibiotic component, three composites contained 8 wt-% ciprofloxacin, and three contained
8 wt-% rifampicin. A series of in vitro tests (Sörensen phosphate buffer, pH 7.4, 37 °C) were performed to evaluate the hydrolytic degradation and drug release behavior of the manufactured composites. The most promising antibiotic-releasing composites, showing continuous release, were also tested against two common osteomyelitis-causing model bacteria utilizing genetically engineered bioluminescent bacteria.
The antibiotic containing composites with 50 wt-% of β-tricalcium phosphate were the most promising with continuous drug release up to approximately 20 weeks. The antibiotic release occurred in several phases and the release was not similar for the two studied antibiotics. The differences were attributed mainly to different molecular size (ciprofloxacin 331 g/mol and rifampicin 823 g/mol) and differences in water solubility (For rifampicin in water at 30 °C, 1.5-1.7 mg/ml depending on the crystal form (Henwood et al. 2000) and for ciprofloxacin at 37 °C, 0.20 mg/ml at pH 7.8 and 0.22 mg/ml at pH 6.9 (Breda et al. 2009)). The composites containing 50 wt-% β-TCP also showed good effect against the common osteomyelitis-causing bacteria, Staphylococcus epidermidis and Pseudomonas aeruginosa. The hydrolytic degradation of the polymer followed first order kinetics and the molar ratio of the comonomers changed, as the degradation proceeded. These composites have great potential to be used in the treatment of osteomyelitis or other bone related infections. In this work, only in vitro tests were performed, and thus the next step for these composites is preclinical testing.